skip to main | skip to sidebar

The graceful, dancelike progression of meditative poses called tai chi originated in ancient China as a martial art, but the exercise is best known in modern times as a route to reduced stress and enhanced health. After reviewing existing scientific evidence for its potential health benefits, I've concluded that the proper question to ask yourself may not be why you should practice tai chi, but why not.

It is a low-impact activity suitable for people of all ages and most states of health, even those who "hate" exercise or have long been sedentary. It is a gentle, calming exercise - some call it meditation in motion - that involves deep breathing but no sweat or breathlessness.

It places minimal stress on joints and muscles and thus is far less likely than other forms of exercise to cause muscle soreness or injury. It requires no special equipment or clothing and can be practiced almost anywhere at any time, alone or with others.

Once the proper technique is learned from a qualified instructor, continuing to practice it need not cost another cent.

The many small studies of tai chi have found health benefits ranging from better balance and prevention of falls to reduced blood pressure, relief of pain and improved immunity.

The latest and perhaps best designed study was conducted among patients with debilitating fibromyalgia, a complex and poorly understood pain syndrome.

Dr. Chenchen Wang and colleagues at Tufts Medical Center in Boston reported in August in The New England Journal of Medicine that tai chi reduced pain and fatigue and improved the patients' ability to move, function physically and sleep. The benefits persisted long after the 12 weeks of tai chi sessions ended.

The study was financed primarily by the National Center for Complementary and Alternative Medicine, a division of the National Institutes of Health. To be sure, documenting tai chi's purported health benefits is a challenge. As an editorial in the journal noted, it is virtually impossible to design an ideal study of tai chi. There is no "fake" version that could serve as a proper control to be tested against the real thing. Thus, researchers have to rely on less-than-perfect comparison groups. In the fibromyalgia study, for example, the control group was given stretching exercises and wellness education.

And unlike evaluations of drugs, tai chi studies cannot be double-blinded such that neither patients nor researchers know which group is receiving which treatment. Those guided by a tai chi master would undoubtedly know who they are and could be influenced by the teacher's enthusiasm for the practice.

Still, scientists have come to better understand and appreciate the mind-body connection, which for too long was dismissed as nothing more than a placebo effect, and most doctors are now more willing to accept the possibility that stress-reducing activities can have a profound effect on health.

There is no question that tai chi can reduce stress. As the study authors described it, tai chi "combines meditation with slow, gentle, graceful movements, as well as deep breathing and relaxation to move vital energy (called qi by the Chinese) throughout the body."

If nothing else, this kind of relaxing activity can lower blood pressure and heart rate, improve cardiovascular fitness and enhance mood. For example, a review in 2008 found that tai chi lowered blood pressure in 22 of 26 published studies.

Thus, it can be a useful aid in treating heart disease, high blood pressure and depression, conditions common among older people who may be unable to benefit from more physically demanding exercise.

Regular practitioners of tai chi report that they sleep better, feel healthier and experience less pain and stiffness, though it cannot be said for certain that tai chi alone is responsible for such benefits.

Yet as Dr. Wang and co-authors noted in an earlier report that analyzed the literature on tai chi and health, a majority of studies have been small and poorly controlled, if they were controlled at all. Therefore, the tai chi practitioners could have been healthier to begin with or could have practiced other health-enhancing habits.

Perhaps the best-documented benefit of tai chi, and one that is easiest to appreciate, is its ability to improve balance and reduce the risk of falls, even in people in their 80s and 90s. The moves are done in a smooth, continuous fashion, as weight is shifted from one leg to the other and arms are moved rhythmically. This can improve muscle strength and flexibility, and enable the muscles in the legs and hips to function in a more coordinated and balanced manner. Thus, practitioners become more stable and sure-footed.

Another benefit, again especially important to older adults, is the apparent ability of tai chi to improve immune function. In a 2007 study also financed by the Complementary and Alternative Medicine center, those who practiced tai chi had a better response to the varicella zoster vaccine that can help prevent shingles.

Talk to a Doctor First

Tai chi is not a substitute for professional medical care, but rather an adjunct to such care and a way to keep debility at bay. As with other forms of alternative medicine, it is best to consult your physician before signing up for instruction.

This is especially important if you are a pregnant woman or have serious physical limitations, joint problems, back pain or advanced osteoporosis. While such conditions do not preclude practicing tai chi, you may have to modify or avoid certain positions.

Although tai chi is a gentle exercise, one can get carried away. Overdoing any activity, including tai chi, can result in sore or sprained muscles. On its Web site, the Complementary and Alternative Medicine center notes that "tai chi instructors often recommend that you do not practice tai chi right after a meal, or when you are very tired, or if you have an active infection."

Also important is assurance that your instructor is well qualified. Instructors do not have to be licensed, and the practice is not regulated by any governmental authority. There are many styles of tai chi - the yang style is most commonly practiced in Western countries - and there are no established training standards.

Traditionally, would-be instructors learn from a master teacher. Before choosing an instructor, you'd be wise to inquire about the person's training and experience.

Learning tai chi from a qualified instructor is critical. The Complementary and Alternative Medicine center cautions that trying to learn it from a book or video is no guarantee that you will be able to perform the moves safely and correctly. [...]

Finally, attending a few sessions or even a 12-week course is not enough to guarantee lasting health benefits. As with any other form of exercise, tai chi must be practiced regularly and indefinitely to maintain its value.
No comments:

A version of this article appeared in print on August 19, 2010, on page A16 of the New York edition.

Meher Baba amused with my musings 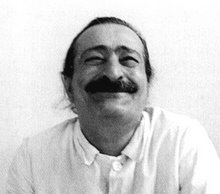